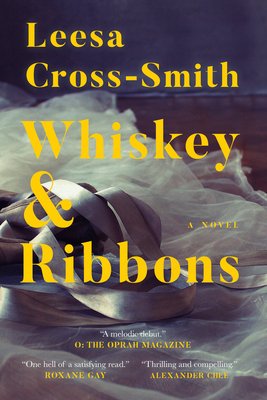 This debut is written from three different perspectives, this novel tells the story of Eamon- a cop who dies in the line of duty, Dalton- Eamon’s adopted brother who tries to help his brother’s widow, and Evi- Eamon’s widow  who is dealing with the death of her husband, the birth of their newborn son, and her growing feelings and reliance on for her brother-in-law. Each character has a distinct voice but are connected through their messy family lines.

O, The Oprah Magazine's Best Books of the Summer Longlisted for the Center for Fiction First Novel Prize Set in contemporary Louisville, Leesa Cross-Smith's mesmerizing first novel surrounding the death of a police officer is a requiem for marriage, friendship and family, from an author Roxane Gay has called "a consummate storyteller." One of the Most Anticipated Books of 2018: Entertainment Weekly, Southern Living, Harper's BAZAAR, The Millions, Electric Lit, Book Riot, BookBub, Chicago Review of Books, POPSUGAR, Refinery29, NYLON, and SheReads Evi--a classically-trained ballerina--was nine months pregnant when her husband Eamon was killed in the line of duty on a steamy morning in July. Now, it is winter, and Eamon's adopted brother Dalton has moved in to help her raise six-month-old Noah. Whiskey & Ribbons is told in three intertwining, melodic voices: Evi in present day, as she's snowed in with Dalton during a freak blizzard; Eamon before his murder, as he prepares for impending fatherhood and grapples with the danger of his profession; and Dalton, as he struggles to make sense of his life next to Eamon's, and as he decides to track down the biological father he's never known. In the vein of Jojo Moyes' After You, Whiskey & Ribbons explores the life that continues beyond loss, with a complicated brotherly dynamic reminiscent of Elizabeth Strout's The Burgess Boys. It's a meditation on grief, hope, motherhood, brotherhood and surrogate fatherhood. Above all, it's a novel about what it means--and whether it's possible--to heal.

A PEN Open Book Award Nominee, Leesa Cross-Smith has been a finalist for the Flannery O'Connor Award for Short Fiction and Iowa Short Fiction Award. She is the author of the short story collection Every Kiss a War and lives in Louisville, KY.