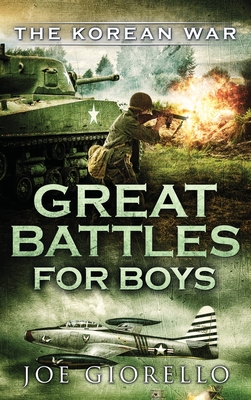 Each book in the series reveals the leaders, tactics, and weapons that won (or lost) some of history's most significant military battles. Filled with historic photos and written in an engaging conversational style by a middle school history teacher, Great Battles for Boys will bring history to life and attract even the most reluctant readers.

In this installment of the series, young readers will learn about the Korean War (1950-53), including:

Moving forward in chronological order, young readers will experience these unforgettable clashes from the front lines. They'll also learn about the war's politics, geography, and the difference between democracy and Communism.

Praise for the Great Battles for Boys series

"This book should be in school libraries everywhere. It is a treasure trove of information that is engagingly written that makes one feel they are in a great classroom with a great instructor sharing his knowledge in a fun way." - 5 Stars, Top Ten Hall of Fame Amazon Reviewer