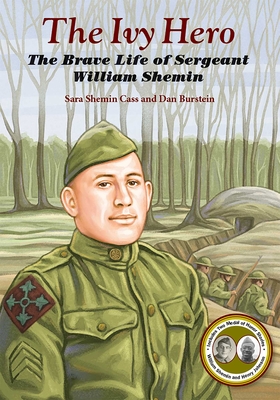 
Usually Ships in 1-5 Days
The Ivy Hero is the true story of Sergeant William (Bill) Shemin, child of immigrants, an American soldier who fought in World War I.  Dedicated, fearless, and brave, he was awarded the Congressional Medal of Honor posthumously in 2015 by President Barack Obama.

Why The Ivy Hero? Sergeant Shemin fought with the U.S. Army’s 4th Division, which is known as the “Ivy” Division because the Roman Numeral for 4 is composed of an I before a V—IV—so its nickname is “IVY.” The Ivy Division’s motto, mirroring the way the ivy plant itself grows, is “steadfast and loyal.” After serving in World War I in the Ivy Division, Bill Shemin used the ivy plant as the logo for his tree and plant business. And “steadfast and loyal” was how he lived his life. He passed along his values of patriotism, education, close family ties, and hard work to three children and 14 grandchildren.

Long after his service in the Army was over, Bill’s daughter, Elsie Shemin-Roth, waged her own battle for many years to have the U.S. government award him the Medal of Honor that rightfully should have been awarded at the time of his service in World War I.

Both Bill Shemin and Henry Johnson were awarded posthumous Medals of Honor by President Obama, due in no small measure to the efforts of their family members.

Although much progress has been made, racial and religious discrimination have been with American society from the birth of our country to the present day. The struggle for equality and freedom continues, as people try to make the United States a “more perfect union.” The pain and suffering of war and discrimination run through this story, but it has a hopeful ending. And much can be learned from the lives and experiences of these heroes!
Sara Shemin Cass is the eldest grandchild of Sgt. William Shemin. She has many life-shaping and important memories of him and experienced firsthand the importance he placed on patriotism, hard work, and family. She has worked at the Federal Reserve Bank of New York in Bank Supervision for over thirty-five years. A mother and grandmother, she was motivated to create this book to keep the legacy of William Shemin alive for the next generation of the Shemin family, as well as those too young to learn this story from those who had firsthand memories of the twentieth-century events described here.

Dan Burstein’s grandmother, Leah Shemin Burstein, was William Shemin’s first cousin. Dan’s father, Leon Burstein, got his first job as a teenager working in Bill Shemin’s greenhouse in the Bronx. Dan met Bill on several occasions, including once as a five-year-old when Bill told him stories from World War I. Dan is the author of fourteen nonfiction books, is managing partner of Millennium Technology Value Partners, a venture capital firm, and a father and grandfather. He traveled with his wife, Julie O’Connor, and son, David Burstein, on the 2018 family trip to the battlefields in France to mark the one hundredth anniversary of the battles in which both William Shemin and Henry Johnson fought.