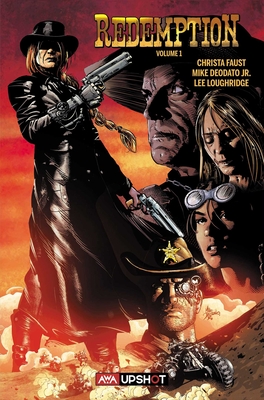 The dusty desert town of Redemption survived the apocalypse but is hanging on by a thread. A despot rules the town with an iron fist and controls its most precious resource: water. When that strongman marks her mother for death, young Rose Obregon ventures into the perilous wasteland to seek the help of the legendary gunslinger Cat Tanner, only to discover that the so-called “Butcher” is long retired, living in solitude, far from what’s left of the world, and preferring to keep it that way. When Rose arrives on Tanner’s doorstep, with gunmen hot on her trail, the Butcher has a choice to make: sit on the sidelines or pick up her guns and do what she does best?

Christa Faust grew up in New York City, in the Bronx and Hell’s Kitchen. She’s been making stuff up her whole life, and spent most of her teen years on endless subway rides, cutting school and scribbling stories.

She sold her first short story when she moved to Los Angeles in the early 90s. After nearly 20 years in her beloved adopted city, she still considers herself an expat rather than a native.

She’s an avid reader and collector of vintage paperbacks, a Film Noir enthusiast and a Tattooed Lady. Christa Faust is the author of several novels, including Choke Hold, Money Shot and Hoodtown. Money Shot was nominated for an Edgar award, Anthony award and Barry award, and won a Spinetingler award in the ‘Rising Star’ category. She also writes media tie-ins for popular TV shows like Supernatural and Fringe and her novelization of the viral hit film Snakes on a Plane earned her a Scribe award. Her work in comics ranges from a fresh take on a classic Marvel superhero to a gritty, semi-autobiographical crime story called Peepland. She has worked in the Times Square peep booths, as a professional dominatrix, and in the adult film industry both behind and in front of the cameras. She grew up in NYC and now lives and writes in Los Angeles, CA.