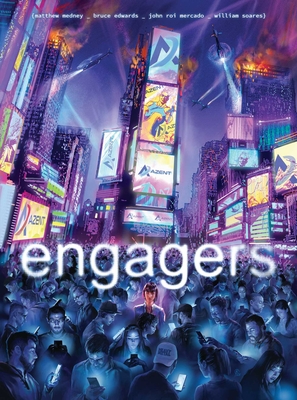 A Dystopian Sci-fi gaming thriller that examines the need for and risks of Big Tech. The power and flaws of innovation and the beauty and destruction of money. Gaming will never be looked at the same after you engage your senses.

“I should have said more. But how could I know? The world, the game, ugh... the game. But now we are here. And there’s no turning back.” While Remi remembers how we got here, we journey back in time through her unreliable memory in this prequel to the present day dystopia we live in. Love, death, and control all sit at Remi’s doorstep, but again, how did we get here? Let Remi take you on a journey and Engage with your senses in this high-concept Sci-Fi thriller.

Matthew Medney is the CEO of the generational & legendary Heavy Metal Magazine, and co-founded Boutique Storytelling Company, Herø Projects where he also still presides as CEO. Leading the charge at two genre focused brands, Matthew spends most of his time thinking about the unknown.

A graduate of the University Of Massachusetts at Amherst's Isenberg School of Management, Matthew started his career in the live events space, operating as a tour & production manager, traveling across 45 countries producing over 200 shows for concerts such as Coachella, Ultra Music Festival, Electric Daisy Carnival & Lollapalooza.

"A Prolific Writer" (Variety) with the ultimate goal of looking to expand minds and engage readers through high concept Science Fiction, Medney has authored best selling works such as his hard sci-fi novel Beyond Kuiper: The Galactic Star Alliance and the graphic novel Dark Wing. In addition, he has penned multiple comic books including The Red, and his highly anticipated forthcoming work The Adventures of Adrienne James, which can best be described as "female Indiana Jones - in space" - SYFY

Other notable comic and graphic novel works Medney has helmed include work done in collaboration with bands and music festivals such as the largest Hip Hop Festival in the world Rolling Loud, Grammy award winning musician Shaggy, along with other notable talents such as NGHTMRE, Pegboard Nerds, Riot, and Insomniac's Events.

Bruce Edwards escaped the clutches of the media industry--battling his way through Vh1, Comedy Central, Spike TV, TV Land, Nickelodeon, Viceland, HBO, and probably a few more--to emerge, battle-scarred from 'industry types', to do the only thing that makes sense in an insensate world: WRITE COMICS. And podcasts and movies and TV shows too, but hey--COMICS. Bruce lives with his loving family on an island, but he won't tell us which one. Knowing him, it probably has a history of pirate activity.