All the Lives We Never Lived: A Novel (Paperback) 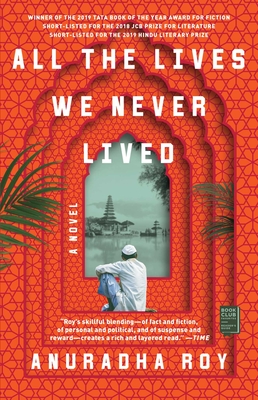 All the Lives We Never Lived: A Novel (Paperback)


Usually Ships in 1-5 Days
From the Man Booker Prize-nominated author of Sleeping on Jupiter and “one of India’s greatest living authors” (O, The Oprah Magazine), a poignant and sweeping novel set in India during World War II and the present day about a son’s quest to uncover the truth about his mother.

In my childhood, I was known as the boy whose mother had run off with an Englishman. The man was in fact German, but in small‑town India in those days, all white foreigners were largely thought of as British.

So begins the “gracefully wrought” (Kirkus Reviews) story of Myshkin and his mother, Gayatri, who rebels against tradition to follow her artist’s instinct for freedom.

Freedom of a different kind is in the air across India. The fight against British rule is reaching a critical turn. The Nazis have come to power in Germany. At this point of crisis, two strangers arrive in Gayatri’s town, opening up to her the vision of other possible lives.

What took Myshkin’s mother from India and Dutch-held Bali in the 1930s, ripping a knife through his comfortingly familiar universe? Excavating the roots of the world in which he was abandoned, Myshkin comes to understand the connections between the anguish at home and a war‑torn universe overtaken by patriotism.

Evocative and moving, “this mesmerizing exploration of the darker consequences of freedom, love, and loyalty is an astonishing display of Roy’s literary prowess” (Publishers Weekly).
Anuradha Roy is the author of An Atlas of Impossible Longing, The Folded Earth, All The Lives We Never Lived, and Sleeping on Jupiter—which won the DSC Prize for Fiction 2016 and was long-listed for the Man Booker Prize 2015. She lives in Ranikhet, India.
"All the Lives We Never Lived is a moving and beautiful story of loss, of the lives of those beloved to us. What makes this novel so special is the sinuous way Anuradha Roy seamlessly and masterfully shuttles between time, overlaying the past with the present, mystery with knowledge to cumulatively create a brilliant tapestry that is the story." — Chigozie Obioma, Man Booker Prize finalist for The Fishermen

“A lush and lyrical fusion of history and storytelling….This mesmerizing exploration of the darker consequences of freedom, love, and loyalty is an astonishing display of Roy’s literary prowess.” — Publisher's Weekly

"[A] moving tale... Roy (Sleeping on Jupiter, 2016) peppers her novel with intricate descriptions of small-town India and weaves an eloquent and tragic story of straitjacketed lives upended when history and personal ambition intersect."— Booklist

"This novel has an epic feel but also portrays the feelings of an abandoned child and captured woman while strongly evoking the sounds, scents, plants, people, and social structures of India at the time."— Library Journal

“[Roy] is a writer of great subtlety and intelligence, who understands that emotional power comes from the steady accretion of detail….[All the Lives We Never Lived] does not directly refer to #MeToo or the macho hyper-nationalism of today’s India. But in its portrayal of power structures, it is part of those very contemporary political conversations. It is also a beautifully written and compelling story of how families fall apart and of what remains in the aftermath.”— Kamila Shamsie, The Guardian

"Roy zeroes in on small moments of connection, showing how even in the midst of great national upheaval, it's those moments that ultimately prove the most profound. . . . All the Lives We Never Lived paints a thoughtful portrait of family and freedom in the midst of the political upheaval of the Indian independence movement."— Shelf Awareness

“Poetic, elegiac . . . Roy’s eye is tender. . . . The scope of All the Lives We Never Lived is vast but also personal.”— Sean Hewitt, Irish Times

“One of India's greatest living authors.”— O, The Oprah Magazine

'Anuradha Roy blends historical fact and remarkable real-life characters into her tale, which takes freedom, in all its messy complexity, as its theme . . . Amid the atmospheric detailing there are pin-sharp modern resonances with modern India's nationalism and punishing patriarchy.”— Siobhan Murphy, The Times (UK)

"Intermingles fact and fiction, history with fantasy, to superb effect . . . a work of beautifully realised history and personal narrative."— David Patrikarakos, The Spectator

“A portrait of one family’s troubles with desire and loss that speaks to the more universal struggles for personal and political freedom." – Time

“An affecting tale of loss, remarriage, and rediscovery.”— BookPage

“A story that eventually encompasses the world far beyond a boy’s little town. . . . Captivating.” —Ron Charles, The Washington Post