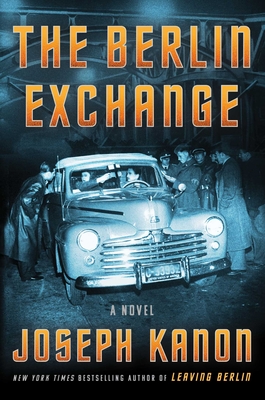 From “the most accomplished spy novelist working today” (The Sunday Times, London), a “heart-poundingly suspenseful” (The Washington Post) espionage thriller set at the height of the Cold War, when a captured American who has spied for the KGB is returned to East Berlin, needing to know who arranged for his release and what they now want from him.

Berlin, 1963. An early morning spy swap, not at the familiar setting for such exchanges, nor at Checkpoint Charlie, where international visitors cross into the East, but at a more discreet border crossing, usually reserved for East German VIPs. The Communists are trading two American students caught helping people to escape over the wall and an aging MI6 operative. On the other side of the trade: Martin Keller, a physicist who once made headlines, but who then disappeared into the English prison system. Keller’s most critical possession: his American passport. Keller’s most ardent desire: to see his ex-wife Sabine and their young son.

The exchange is made with the formality characteristic of these swaps. But Martin has other questions: Who asked for him? Who negotiated the deal? The KGB? He knows that nothing happens by chance. They want him for something. Not physics—his expertise is out of date. Something else, which he cannot learn until he arrives in East Berlin, when suddenly the game is afoot.

Intriguing and atmospheric, with action rising to a dangerous climax, The Berlin Exchange “expertly describes what happens when a disillusioned former agent tries to come in from the cold” (The New York Times Book Review), confirming Kanon as “the greatest writer ever of historical espionage fiction” (Spybrary).

Joseph Kanon is the Edgar Award–winning author of The Accomplice, Defectors, Leaving Berlin, Istanbul Passage, Los Alamos, The Prodigal Spy, Alibi, Stardust, and The Good German, which was made into a major motion picture starring George Clooney and Cate Blanchett. He lives in New York City.

“The Berlin Exchange, by the veteran spy-story author Joseph Kanon, expertly describes what happens when a disillusioned former agent tries to come in from the cold. . . . Kanon vividly evokes the suspicion, hypocrisy and relentless grayness of life in the East. . . . the plot shifts into high gear and turns into a complex, high-stakes operation in which Martin, thrillingly, is pulling all the strings. He’s one step ahead of his enemies, and three steps ahead of us.” —Sarah Lyall, The New York Times Book Review

"In Joseph Kanon’s skillful telling, Keller’s elaborate scheme for escaping with his family to the West is heart-poundingly suspenseful." —Washington Post

"[A] masterly Cold War thriller. . . . [Kanon] is a pro. . . . from the opening paragraph of The Berlin Exchange, with its matter-of-fact immediacy, you feel you’re in safe hands. . . . it’s superbly accomplished, from the Swiss watch plot and crisp dialogue to an atmosphere so well realised it feels as if it is written in black-and-white film. . . . Bold disguises, car chases and handbrake-turn twists wind inexorably to a climax at the border that shows that Kanon can do not just the talk, but also the tensest of spotlit walks. Expect this to exchange the page for the screen, but before then let yourself enjoy a modern master at work." —The Times (UK)

"Joseph Kanon is, for my money, the best spy writer working today, an author of rare gifts as a stylist, plotter and creator of characters. He is also the greatest writer ever of historical espionage fiction. . . . He is absolutely worth his place in the pantheon of the greats." —Tim Shipman, Spybrary

"Thoroughly absorbing, a thoughtful and subtle evocation of a place and era, with occasional invigorating bursts of violence. . . . when [Kanon's] at his best you get the rare sense of a writer whose style, plot and characters have been perfectly aligned to convey his vision of the world." —Sunday Telegraph (UK)

"[A] riveting tale of a spy forced to go back into the cold as a way of reclaiming his life. . . . Genuine suspense, including an exciting variation on the border-crossing theme, combine beautifully with moving psychological drama." —Booklist (starred review)

"A novel that gives paranoia a new name, Kanon's latest in a brilliant collection—including Leaving Berlin (2014) and Istanbul Passage (2012)—may be his most tightly rendered. The suspense builds quietly, almost stealthily, before tightening its grip. Another supersophisticated spy thriller from a ranking master." —Kirkus (starred review)

"Kanon balances a convincing portrayal of spycraft with fleshed-out characters, while vividly depicting the impact of secret lives on the loved ones of those engaged in espionage." —Publishers Weekly