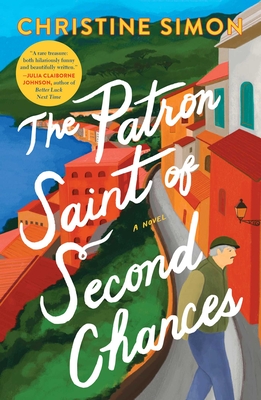 The self-appointed mayor of a tiny Italian village is determined to save his hometown no matter the cost in this charming, hilarious, and heartwarming debut novel.

Vacuum repairman and self-appointed mayor of Prometto, Italy (population 212) Signor Speranza has a problem: unless he can come up with 70,000 euros to fix the town’s pipes, the water commission will shut off the water to the village and all its residents will be forced to disperse. So in a bid to boost tourism—and revenue—he spreads a harmless rumor that movie star Dante Rinaldi will be filming his next project nearby.

Unfortunately, the plan works a little too well, and soon everyone in town wants to be a part of the fictional film—the village butcher will throw in some money if Speranza can find roles for his fifteen enormous sons, Speranza’s wistfully adrift daughter reveals an unexpected interest in stage makeup, and his hapless assistant Smilzo volunteers a screenplay that’s not so secretly based on his undying love for the film’s leading lady. To his surprise—and considerable consternation, Speranza realizes that the only way to keep up the ruse is to make the movie for real.

As the entire town becomes involved (even the village priest invests!) Signor Speranza starts to think he might be able to pull this off. But what happens when Dante Rinaldi doesn’t show up? Or worse, what if he does?

A “hilariously funny and beautifully written” (Julia Claiborne Johnson, author of Better Luck Next Time) novel about the power of community, The Patron Saint of Second Chances is perfect for fans of Fredrik Backman and Maria Semple.

Christine Simon grew up in a very large and very loud Italian family and now lives with her husband and four children. The Patron Saint of Second Chances is her first novel.

"A charming farce that highlights the triumph of hope and community in an often unforgiving world.” —PEOPLE

"The Patron Saint of Second Chances is a rare treasure: both hilariously funny and beautifully written. I was sad to say goodbye to these delightful, large-hearted characters when I turned the final page. Sequel, please.” —Julia Claiborne Johnson, author of Better Luck Next Time and Be Frank With Me

"The Patron Saint of Second Chances is the most charming, original and hilarious novel I have read in ages. I laughed out loud on almost every page. Simon is the master of creating lovable, quirky and relatable characters that feel like your best friends. All I want for Christmas is to meet Signor Speranza and have my vacuum cleaner repaired at his shop. And I'm desperate to be in the movie, with or without Dante Rinaldi. This novel is something special. Everyone with a sense of humor must pick this up immediately." —Elyssa Friedland, author of Last Summer at The Golden Hotel

"A joyful, charming, and delightfully funny story! Take a trip to Italy and meet a gaggle of villagers whose well-intentioned mayor will stop at nothing to save his town from financial ruin. Simon’s warm-hearted, original gem of a novel is the feel-good read we all need."
—Amy Poeppel, author of Musical Chairs

“A glorious romp of a book with a cast of characters to fall in love with. Gorgeous, hilarious and brimming with joy. Christine Simon's writing is just a delight.”—Helen Paris, author of Lost Property

“A charming, fast-paced and warm-hearted farce. Upbeat, escapist and a lot of fun.”—Caroline Hulse, author of The Adults

"[A] sparkling, hilarious debut… Simon’s wit pervades every pages, with colorful portrayals of Speranza and the town’s quirky inhabitants. This triumphant farce is a gem.” —Publishers Weekly (starred review)

“Full of slapstick humor (including a rescue from a wild goat) and a large cast of quirky characters, Simon’s debut is brimming with heart… Fans of Fredrik Backman, Phaedra Patrick, and other chroniclers of small-town humor will savor this.” —Booklist (starred review)

"A tiny Italian village becomes the center of a media storm in this humorous novel by Christine Simon." —LifeSavvy

"This charming comedy, filled with devoted and lovable characters, is a breath of fresh air.” —Christian Science Monitor

“[A] tale that will keep you entertained from first page to last. It’s one of the most amusing novels I’ve read in years, which is just what we need in these dark times.” —BookReporter