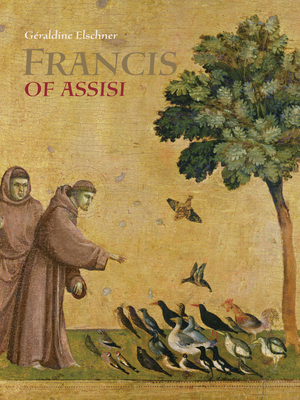 
On Our Shelves Now
As a young man Francis of Assisi renounced his wealthy background, dressed in coarse robes and lived in poverty. He believed every living creature and thing on earth was sacred and deserved respect. In this spirit, he founded the Franciscan Order, which endures today. Géraldine Elschner narrates in her poetic text the life and work of Francis of Assisi, one of the most famous saints of Christianity. Glowing reproductions of Italian frescoes and quotes by Pope Francis portray his life and works.
Géraldine Elschner is the author of many picture books including Like a Wol, Martin Luther, The Nativity, The Three Kings, and Where is the Frog? Originally from France, she studied Germanic and Romance languages, and has translated scores of books.
"As a basic introduction to the life of St. Francis, this book fills a niche, with the added benefit of exposure to some great works of Western art." —Misti Tidman, School Library Journal

"This picture book biography of Saint Francis of Assisi is like none I've seen (and he's a pretty popular saint). The narration pulls the reader in, regardless of age, and tells the compelling story of Francis's life – his renunciation of wealth, his effort to follow Christ's teachings, and his kindness to animals. But it is the Renaissance art and the quotations from current Pope Francis on every page that really set it apart. Stunning beauty accompanies the captivating story. Elschner has created a treasure that asks to be read and paged through again and again." —Victoria DiMassa, Glass of Wine, Glass of Milk