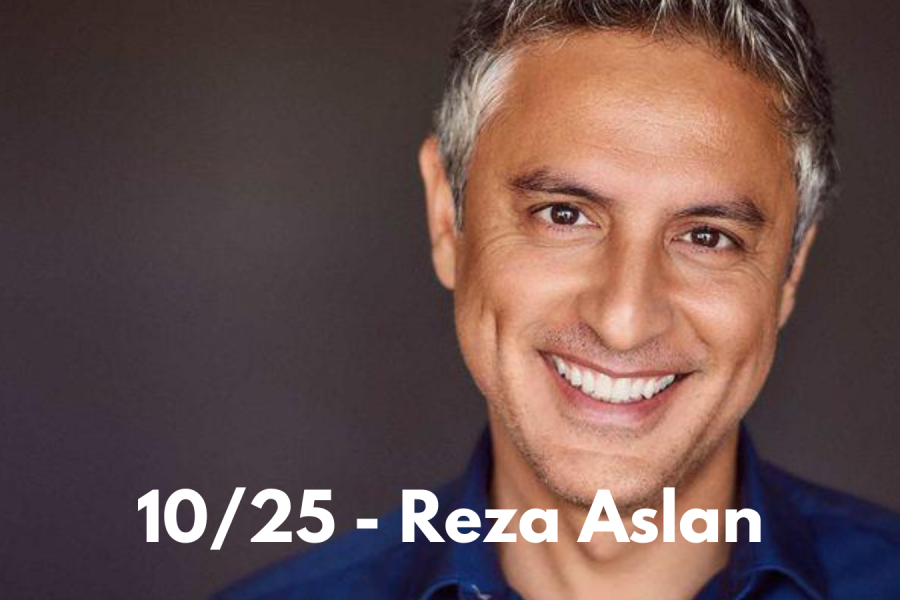 Rakestraw Books is delighted to present an evening with Reza Aslan as we celebrate the publication of his new book, An American Martyr in Persia: The Epic Life and Tragic Death of Howard Baskerville with a special in-person event here at the bookstore.

In this erudite and piercing biography, best-selling author Reza Aslan proves that one person’s actions can have revolutionary consequences that reverberate the world over.

Little known in America but venerated as a martyr in Iran, Howard Baskerville was a twenty-two-year-old Christian missionary from South Dakota who traveled to Persia (modern-day Iran) in 1907 for a two-year stint teaching English and preaching the gospel. He arrived in the midst of a democratic revolution—the first of its kind in the Middle East—led by a group of brilliant young firebrands committed to transforming their country into a fully self-determining, constitutional monarchy, one with free elections and an independent parliament.

The Persian students Baskerville educated in English in turn educated him about their struggle for democracy, ultimately inspiring him to leave his teaching post and join them in their fight against a tyrannical shah and his British and Russian backers. “The only difference between me and these people is the place of my birth," Baskerville declared, “and that is not a big difference.”

In 1909, Baskerville was killed in battle alongside his students, but his martyrdom spurred on the revolutionaries who succeeded in removing the shah from power, signing a new constitution, and rebuilding parliament in Tehran. To this day, Baskerville’s tomb in the city of Tabriz remains a place of pilgrimage. Every year, thousands of Iranians visit his grave to honor the American who gave his life for Iran.

In this rip-roaring tale of his life and death, Aslan gives us a powerful parable about the universal ideals of democracy—and to what degree Americans are willing to support those ideals in a foreign land. Woven throughout is an essential history of the nation we now know as Iran—frequently demonized and misunderstood in the West. Indeed, Baskerville’s life and death represent a “road not taken” in Iran. Baskerville’s story, like his life, is at the center of a whirlwind in which Americans must ask themselves: How seriously do we take our ideals of constitutional democracy and whose freedom do we support?

Join us on Tuesday, 25 October 2022 at 7 PM as we welcome Reza Aslan to Rakestraw Books for a special talk and signing. This is a FREE event, but advance reservations are strongly encouraged as space is limited. We do ask as a courtesy that only books purchased at Rakestraw Books be brought in for signing. If you have questions, give the bookstore a call at (925) 837-7337. Make your reservations by clicking below.

An American Martyr in Persia: The Epic Life and Tragic Death of Howard Baskerville (Hardcover)

Aslan tells an extraordinary tale of both heroic ideals and heroic action. This is a great read!