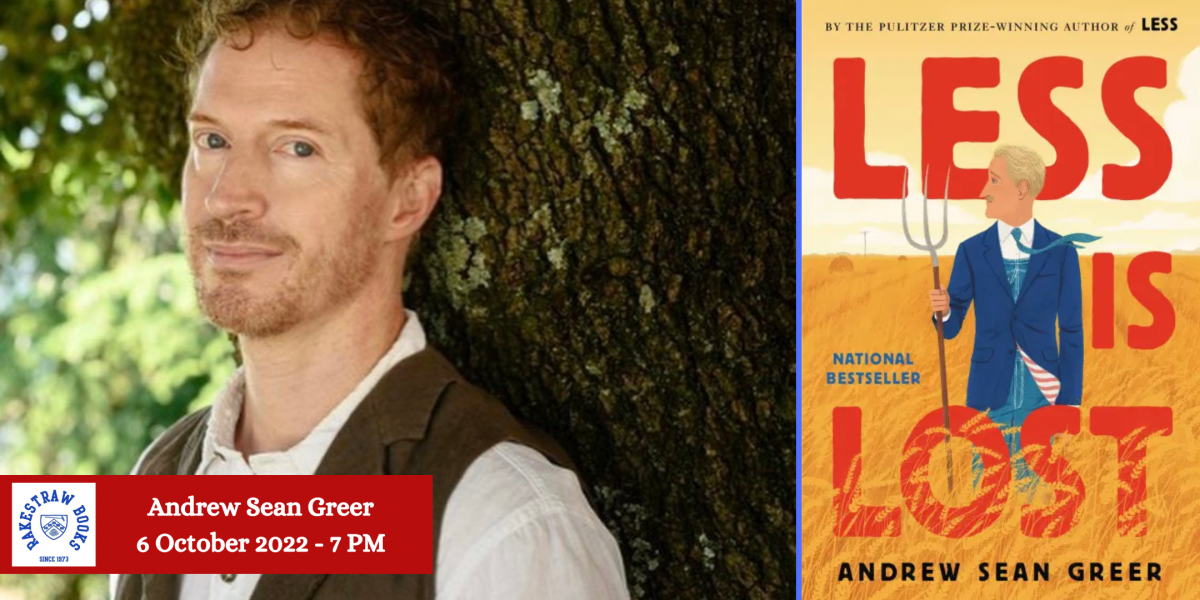 Rakestraw Books is delighted to invite you to a special evening talk and book-signing with Andrew Sean Greer as we celebrate the publication of his new novel, Less Is Lost.

In the follow-up to the “bedazzling, bewitching, and be-wonderful” (New York Times​) best-selling and Pulitzer Prize-winning Less: A Novel, the awkward and lovable Arthur Less returns in an unforgettable road trip across America.

“Go get lost somewhere, it always does you good.”

For Arthur Less, life is going surprisingly well: he is a moderately accomplished novelist in a steady relationship with his partner, Freddy Pelu. But nothing lasts: the death of an old lover and a sudden financial crisis has Less running away from his problems yet again as he accepts a series of literary gigs that send him on a zigzagging adventure across the US.

Less roves across the “Mild Mild West,” through the South and to his mid-Atlantic birthplace, with an ever-changing posse of writerly characters and his trusty duo – a human-like black pug, Dolly, and a rusty camper van nicknamed Rosina. He grows a handlebar mustache, ditches his signature gray suit, and disguises himself in the bolero-and-cowboy-hat costume of a true “Unitedstatesian”... with varying levels of success, as he continues to be mistaken for either a Dutchman, the wrong writer, or, worst of all, a “bad gay.”

We cannot, however, escape ourselves—even across deserts, bayous, and coastlines. From his estranged father and strained relationship with Freddy, to the reckoning he experiences in confronting his privilege, Arthur Less must eventually face his personal demons.

With all of the irrepressible wit and musicality that made Less a bestselling, Pulitzer Prize-winning, must-read breakout book, Less Is Lost is a profound and joyous novel about the enigma of life in America, the riddle of love, and the stories we tell along the way.

This event will take place at here at Rakestraw Books. Tickets are $10 -- you will receive $10 off your purchase of Less Is Lost.