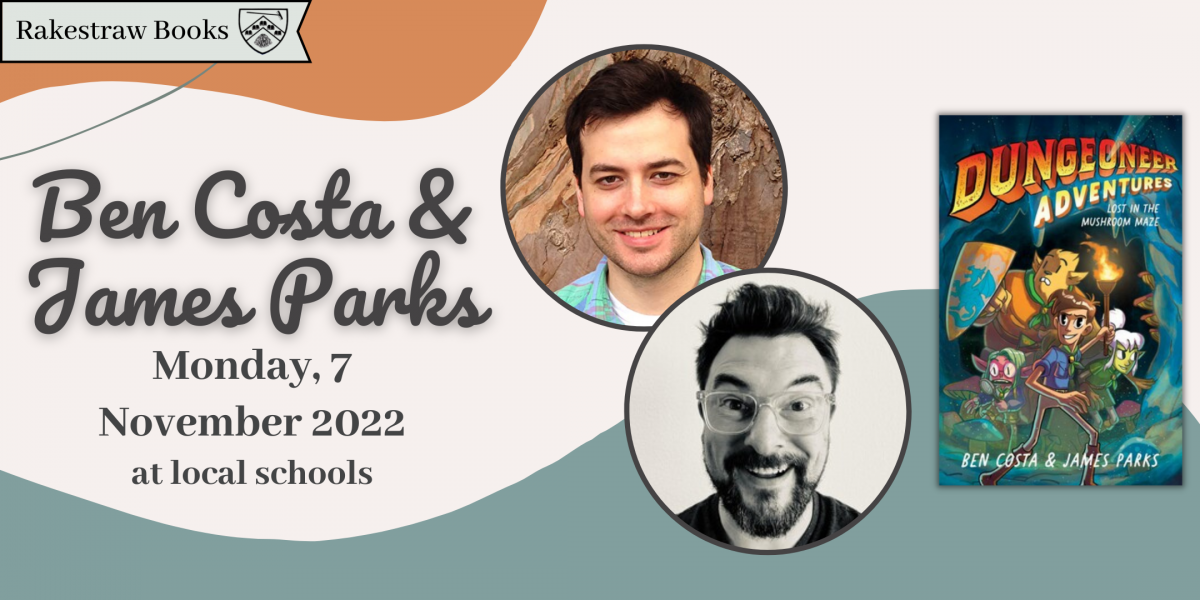 Rakestraw Books is thrilled to bring writing duo Ben Costa and James Parks to local schools, to talk about their newest series Dungeoneer Adventures, on Monday, 7 November 2022. San Francisco Bay Area natives, Costa and Parks have been friends since second grade. In addition to Dungeoneer Adventures, the two are the creators of the graphic novel series Rickety Stitch and the Gelatinous Goo (for which Ben is also the artist), as well as the tabletop roleplaying game Land of Eem.

About Dungeoneer Adventures #1: Lost in the Mushroom Maze:

Coop Cooperson lives in the Land of Eem, a fantastical realm where many different species live together and there is always more magic to be discovered by those up to the task. The Dungeoneer Academy trains future explorers with classes like Dungeons and Mazes, Creatures and Critters, and Swords and Sorcery.

Coop believes in the academy’s mission and the Dungeoneer’s Code, but being the only human student can make it difficult to fit in—sometimes he wonders if he really belongs. Lucky for Coop, his best friend Oggie the bugbear has his back, as do the two other members of their exploring team, Daz the boggart and Mindy the imp. They have to rely on each other more than ever as the test for their Junior Dungeoneer Badges looms closer.

If Coop and his friends fail to run the final gauntlet in the fungal jungle, they will have to leave the academy. As future dungeoneers, they know to expect the unexpected, but nothing could prepare them for the adventure in store.

We are offering SIGNED BOOKS and FREE SCHOOL DELIVERY! To qualify for free delivery to your school, the order must be placed by 8PM on Sunday, 6 November. Select School Event Delivery during checkout and in the Comment Box note the name of school, student, and teacher. You can also select in-store pickup or purchase in-store anytime.

Order your SIGNED copies below.